Future human explorers on the moon might have 99 problems, but staying warm or cool won’t be one. A team led by planetary scientists at UCLA has discovered shady locations within pits on the moon that always hover around a comfortable 63 degrees Fahrenheit.

The pits, and caves to which they may lead, would make safer, more thermally stable base camps for lunar exploration and long-term habitation than the rest of the moon’s surface, which heats up to 260 degrees during the day and drops to 280 degrees below zero at night.

Pits were first discovered on the moon in 2009, and since then, scientists have wondered if they led to caves that could be explored or used as shelters. About 16 of the more than 200 pits are probably collapsed lava tubes, said Tyler Horvath, a UCLA doctoral student in planetary science, who led the new research. Two of the most prominent pits have visible overhangs that clearly lead to some sort of cave or void, and there is strong evidence that another’s overhang may also lead to a large cave.

Lava tubes, also found on Earth, form when molten lava flows beneath a field of cooled lava or a crust forms over a river of lava, leaving a long, hollow tunnel. If the ceiling of a solidified lava tube collapses, it opens a pit that can lead into the rest of the cavelike tube.

Horvath processed images from the Diviner Lunar Radiometer Experiment — a thermal camera and one of six instruments on NASA’s robotic Lunar Reconnaissance Orbiter — to find out if the temperature inside the pits diverged from those on the surface.

Focusing on a roughly cylindrical 100-meter–deep depression about the length and width of a football field in an area of ​​the moon known as the Mare Tranquillitatis, Horvath and his colleagues used computer modeling to analyze the thermal properties of the rock and lunar dust and to chart the pit’s temperatures over a period of time.

The results, recently published in the journal Geophysical Research Letters, revealed that temperatures within the permanently shadowed reaches of the pit fluctuate only slightly throughout the lunar day, remaining at around 63 degrees. If a cave extends from the bottom of the pit, as images taken by the Lunar Reconnaissance Orbiter Camera suggest, it too would have this relatively comfortable temperature. 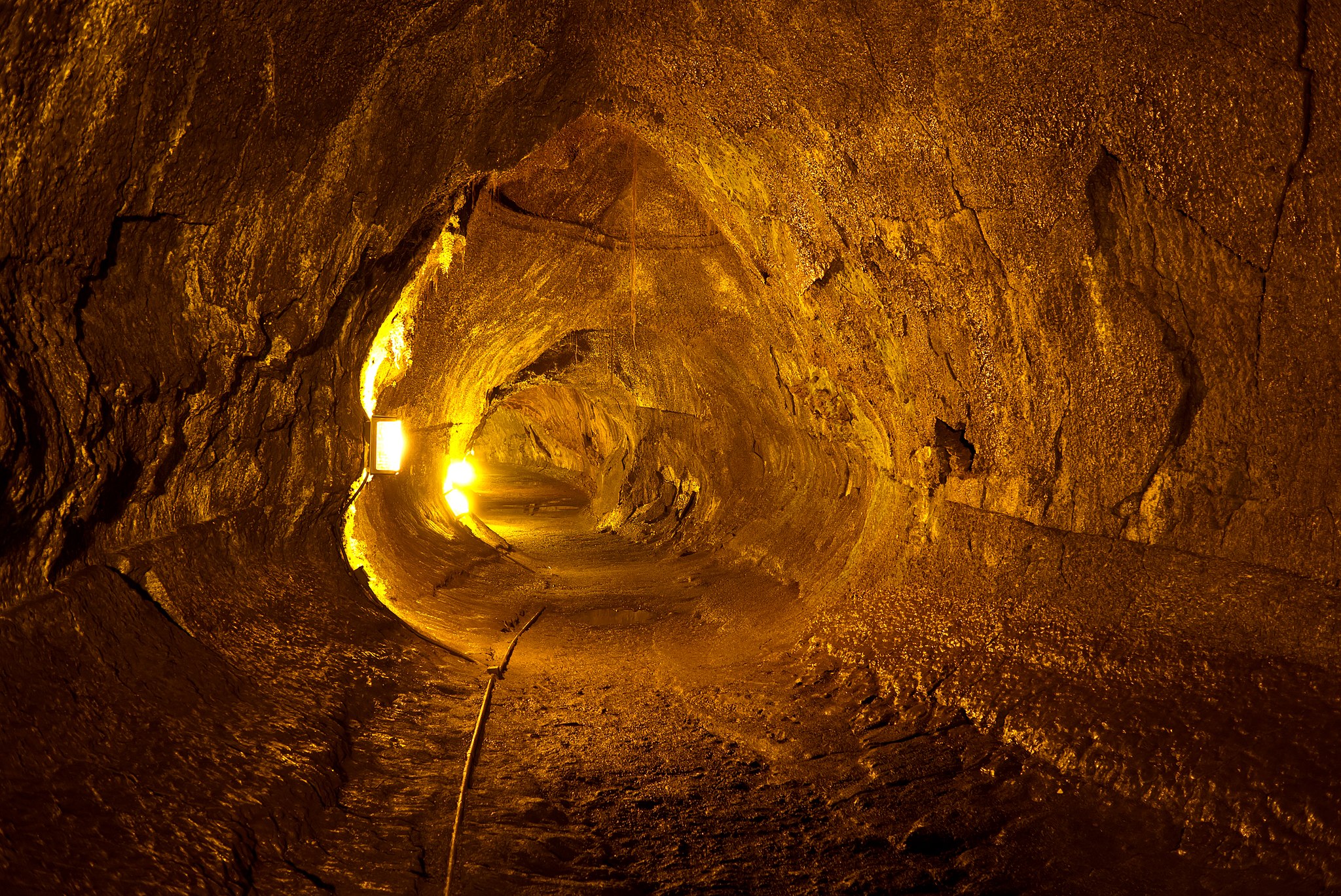 A good place for a base? Scientists predict that some lunar pits lead to lava tubes like the one seen here in Hawaii Volcanoes National Park. The moon has similar tunnels, which are left behind after molten lava flows beneath the surface.

The research team, which also included UCLA professor of planetary science David Paige and Paul Hayne of the University of Colorado Boulder, believes the shadowing overhang is responsible for the steady temperature, limiting how hot things get during the day and preventing heat from radiating away at night. Meanwhile, the sunbaked part of the pit floor hits daytime temperatures close to 300 degrees, some 40 degrees hotter than the moon’s surface.

“Because the Tranquillitatis pit is the closest to the lunar equator, the illuminated floor at noon is probably the hottest place on the entire moon,” said Horvath.

A day on the moon lasts nearly 15 Earth days, during which the surface is constantly bombarded by sunlight and is frequently hot enough to boil water. Unimaginably cold nights also last about 15 Earth days. Inventing heating and cooling equipment that can operate under these conditions and producing enough energy to power it nonstop could prove an insurmountable barrier to lunar exploration or habitation. Solar power — NASA’s most common form of power generation — doesn’t work at night, after all. (NASA currently has no plans to establish an exploration base camp or habitations on the moon.)

Building bases in the shadowed parts of these pits allows scientists to focus on other challenges, like growing food, providing oxygen for astronauts, gathering resources for experiments and expanding the base. The pits or caves would also offer some protection from cosmic rays, solar radiation and micrometeorites.

“Humans evolved living in caves, and to caves we might return when we live on the moon,” said Paige, who leads the Diviner Lunar Radiometer Experiment.

Diviner has been mapping the moon continuously since 2009, producing NASA’s second largest planetary dataset and providing the most detailed and comprehensive thermal measurements of any object in our solar system, including Earth. The team’s current work on lunar pits has improved data from the Diviner experiment.

“Because nobody else had looked at things this small with Diviner, we found that it had a bit of double vision, causing all of our maps to be a bit blurry,” said Horvath. The team worked to align the many images taken by the instrument until they could achieve an accurate thermal reading down to the level of a single pixel. This process yielded much higher resolution maps of the moon’s surface.

Data from the early stages of this lunar pit thermal modeling project were used to help develop the thermal management system of the rover for NASA’s proposed Moon Diver mission. Horvath and Hayne were part of the scientific team for this mission, which aims to have the rover rappel into the Tranquillitatis pit to research the layers of lava flows seen in its walls and to explore any existing cave.

Horvath and Paige are scientific team members for a new lunar-bound thermal camera led by Paul Hayne named L-CIRiS, which will head to the lunar south pole in late 2023 to get the first ground-based thermal images.

/Public Release. This material from the originating organization/author(s) may be of a point-in-time nature, edited for clarity, style and length. The views and opinions expressed are those of the author(s). View in full here.